This online Magic 8 ball fortune teller will give you day-to-day advice. You can ask the magic eight ball anything you want, whenever you like! And if you focus strongly enough on your question, the magical eight ball will align you with the perfect answer. Just ask the magic ball online for predictions about your future with a simple yes or no questions. Give it a shot and let the virtual magic eight ball predict your future…or buy the real Magic 8 ball as great gift for someone!

How to use the virtual Magic 8 Ball Online

It is free to use the magic eight ball, just be prepared to ask a yes or no question. Then click on the eight ball, and the ball will start to shake. An answer will soon be revealed. To ask the magic ball again, just click on it and repeat the process. For those with a mobile device, just shake your device to get the eight ball shaking.

Better not tell you now

More on the Magic 8 Ball

2. How the real Magic 8 Ball works

3. Questions to ask the Magic 8 ball

4. What are the Magic 8 Ball Answers?

Who invented the Magic 8 ball? Well, the magic ball was first seen in the 1940s short film “You Nazty Spy” starring the comedy group, the ”Three Stooges”. A billiards 8 ball was used as a fortune telling device in that short film. However, it would take another ten years until the the real Magic eight ball would take shape.

The initial component was invented in the 1944 by a man called Albert C. Carter – who’s mother was a famous Cincinnati clairvoyant. Carter filed a patent for a cylindrical fortune telling device, but unfortunately he died before the patent was granted in 1948.

Carter had his partner’s name, Abe Bookman, attached to the patent. The first fortune telling device went under the name Syco-Seer, which they managed to sell both before and after the creation of their novelty company Alabe Crafts, Inc. in 1946. After Carter’s passing, Bookman redesigned the Syco-Seer, to a smaller tube shaped version that went by the name Syco-Slate. 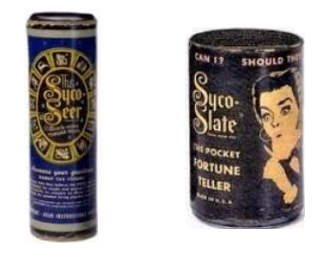 Then a gain in 1948, a new design was introduced in the form of a crystal ball. While the ball shaped design was not a big hit, it certainly caught the attention of Brunswick Billiards. In 1950 they commissioned Alabe Crafts Inc. to create a fortune telling device in the form of an eight ball as we know it today. Abe Bookman filed his final two trademarks in 1961 and 1962.

Since 1950 when the magic eight ball was first introduced, it has gone through several revisions and it is now owned and manufactured by Mattel toy company.

2. How the real Magic 8 Ball works

The real magic eight ball looks like an oversized black/white 8 ball, just like a billiard ball. Inside the magic ball contains a floating die. This die has 20 faces with different messages. So, as you play the magic 8 ball game and shake it, you will get a message that can be read through a small window placed on the magic 8 ball’s bottom. The messages can be either negative (no, very doubtful etc.), affirmative (yes, without a doubt etc.), or non-committal (ask again later, cannot predict now etc.). 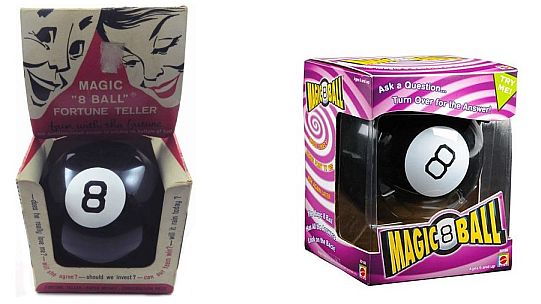 3. Questions to ask the Magic 8-ball

The best type of questions to ask the 8 ball would be anything that can be answered with a simple yes or no. For example, you could ask 8 ball questions like: ”Will I meet someone special this summer?”, ”Should I take this job?”, ”Should I go for it?”, ”Will I find a new apartment next month?” etc..

Don’t ask the magic eight ball any ”open questions” such as ”How will we meet”, ”Why doesn’t he love me”, ”When will I get pregnant” etc. The reason for this has to do with the type of answers that a standard magic eight ball can give you – see next.

4. What are the Magic 8 Ball Answers

So, you can ask the fortune telling 8 ball anything you want, but what answers can you expect from the magic ball? Below is a list on the 20 answers that you will find on the floating polygon of a standard Magic 8 ball.

Negative Statements:
1. My reply is no
2. Don’t count on it
3. Very doubtful
4. Outlook not so good
5. My sources say no

As you can see from the list above, 5 of the possible answers inside the magic 8 ball are negative, 10 are positive, and 5 are non-committal (or neutral). The magic 8 ball answers are seen as white letters on a blue background from a small window at the bottom of the magic ball 8.

If you find a virtual Magic 8 ball online, you might find other answers than the above.

If you want to buy a magic 8 ball toy, you can either get them from your local apartment stores or get them online. Prices can range between $8 to $15 for a new one.


Since Mattel is the company that develops the original magic eight ball, look for the Mattel Magic 8 Ball brand. Mattel does also sell a few different type Magic 8 balls that can come in different colors.

If you decide to do your own search online to find a Magic 8 Ball for sale, you may find them branded as ”fortune teller ball” or ”fortune ball”. These are not the original magic eight balls, but can be just as fun. For example, some companies are selling custom magic 8 balls where you can print your own logo on the magic ball. They are sold as ”regular” and ”mini” fortune balls and key-chains.

Have there been problems using the Magic 8 Ball?

Since they were first manufactured up until today, there have been several different versions manufactured. As you know, for a typical session with the Magic 8 ball, you start off by holding it with the window facing down. Then, turn the magic ball so that the window faces up. This sets the floating die in motion. When the die floats to the top you see a message appearing against the window. Some people have reported seeing bubbles in the window, which might have been caused by heavy shaking of the Magic 8 ball. Some who bought the Magic 8 ball have also experienced the liquid inside to be too murky, and the text hard to read. However, in general, most who have owned one seem to have enjoyed it.

Is the Magic 8 ball real?

Well, it sure is a real toy, but you should probably not base your life decisions on it. It is meant to be used as a fun toy for both adults and children.

What does the inside of the Magic 8 Ball look like?

Look at these images…

Inside the eight ball there is a cylinder filled with a blue liquid, together with a floating 20-sided die.

The ”Crazy 8 ball” is not a Magic 8 Ball, but it looks just like a normal 8 ball. It is weighted off-center and used for playing practical jokes when playing billiards. The rolls are unpredictable, making the ”Crazy 8 Ball” great for jokes!

What is a Digital Magic 8 Ball?

A Digital 8 Ball is actually connected with DIY hacks where people have cut open a real Magic 8 Ball and replaced the cylinder with a digital device to output the answers.